After months of planning and countless hours of hard work from the whole team, The Explain Pain Handbook: Protectometer launch went off without a hitch. NOI HQ was packed to the rafters with guests from a whole range of backgrounds including doctors, physiotherapists, occupational therapists, psychologists, artists, return to work and worker’s compensation consultants, neighbours, friends, family, and most of the BiM crew. The entire evening had an air of excitement, potential and celebration.

David Butler got the official part of the evening underway from behind the drumkit- he’d been practising the famous drum fill from Phil Collins “In the air tonight” all day. This was no random choice of course – Phil Collins has experienced chronic pain for some time and has been quoted as saying that he can’t even hold his drum sticks without feeling pain – a statement filled with notions of meaning, threat, danger and context. With everyone’s attention, David introduced our very special guest Dr Don Russell. Dr Russell has been the Australian Ambassador to the United States, Principal Advisor to an Australian Prime Minister, and currently is the Chief Executive of the South Australia Department of State Development. Don spoke briefly about his current role in supporting small business, promoting innovation within the state and helping to commercialise research. He praised NOI for being a small, South Australian business exporting to the world and had a simple message – “we need more NOIs!” David was back to introduce Lorimer Moseley with one of his favourite stories – recounting a meeting with the late Pat Wall some years ago. Pat had asked “Who is this Moseley fellow, he’s the smartest Australian I’ve ever met”, to which David could only stammer, “But, Pat, I’m Australian….” Lorimer spoke briefly about The Explain Pain Handbook: Protectometer and how important it was for him that the book was now out in the world and the good that he hoped it would achieve for pain sufferers. Lorimer made special mention of Return to Work SA (the local workers compensation corporation), whose CEO was in attendance as another special guest, thanking them for their ongoing support of the work both BiM and NOI were undertaking. Lorimer then introduced Luigi Pisaniello, a local opera singer who sang an acapella rendition of Caruso – a song that ‘tells a story about the pain and longings of a man who is about to die while he is looking into the eyes of a girl who was very dear to him.’ As eyes were surreptitiously dried in some parts of the room, David was back to introduce one of the new and novel ideas of The Explain Pain Handbook: Protectometer – DIMs and SIMs. Right on cue the kitchen door opened and giant platters of freshly steamed dim sims began circulating around the room, much to the gastronomical delight of all of the guests. Sarah-Bella (aka Lexy) spent hours with body artist Kim Cakebread and the results were simply stunning: 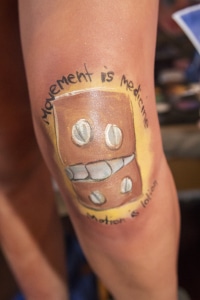 Each guest who ate (or even smelled!) a dim sim was asked to share a DIM or a SIM on our giant Protectometer – we collected over a hundred of each. The art exhibition drew a crowd, leading to ponderings and discussions. Sarah-Bella joined the exhibition leading to a surreal experience for some guests. And then it was done, The Explain Pain Handbook: Protectometer was launched (and the clean up began).

The Explain Pain Handbook: Protectometer can be purchased from anywhere around the world at protectometer.com. It can also be purchased via Amazon UK, or OPTP.com throughout the US.

Be sure to check out protectometer.com for other resources and to join the DIM SIM Community